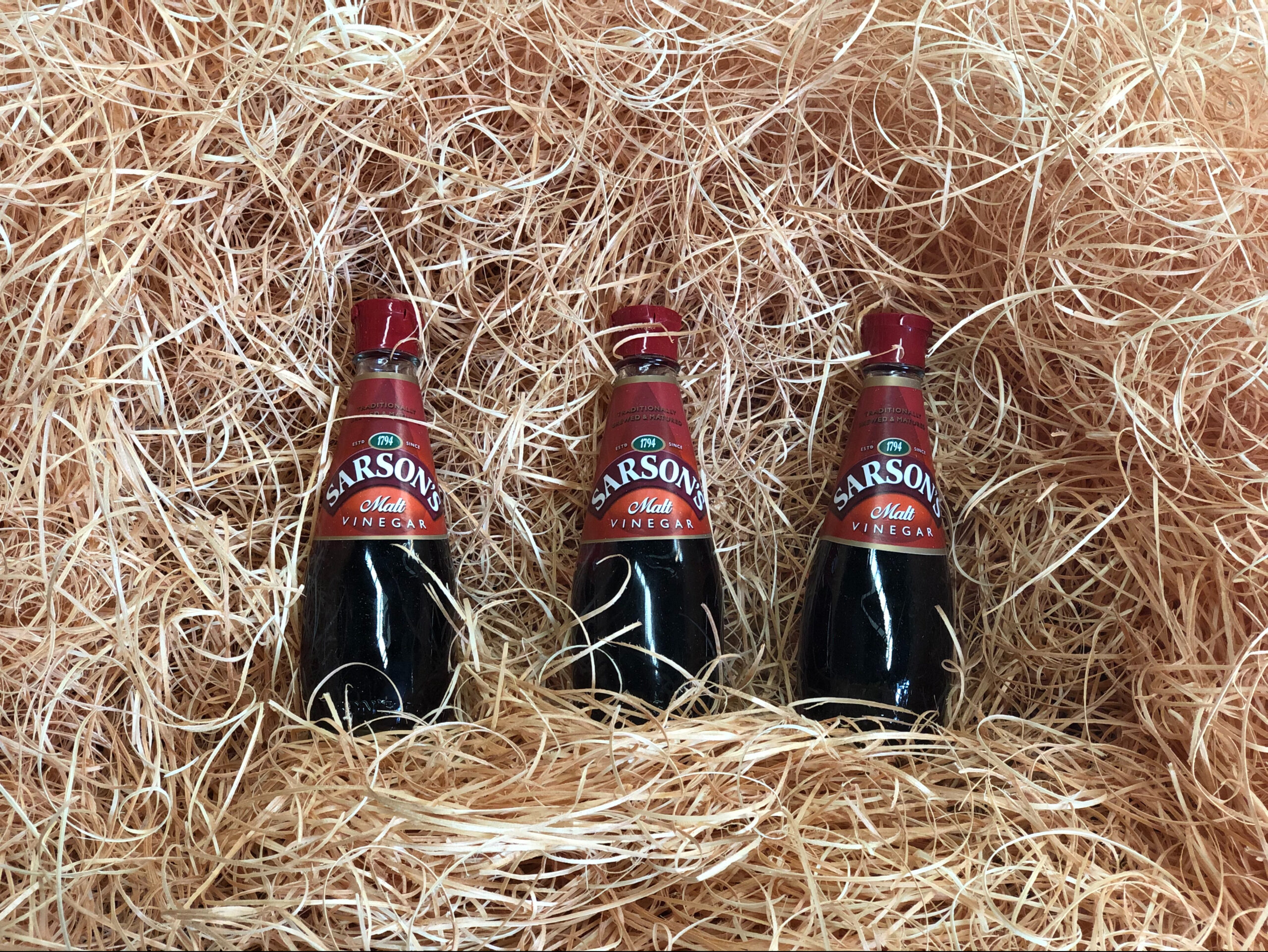 When we teamed up with Sarson’s Vinegar back in 2018, it wasn’t to help them out with their packaging.

Among the lesser-known and, on the face of it, more surprising uses of wood wool is the role it plays in the traditional manufacture of British malt vinegar.

If you were to visit the Sarson’s factory in Manchester and take a peek into one of the wooden vats where the vinegar matures, you’d see bales of our wood wool in there along with it: it’s helping the natural chemistry along, and contributing towards that distinctive final flavour.

But how? It’s actually not rocket science; but it does make for a fascinating story – and not just because it really does explain why a splash of Sarson’s is pretty much everyone’s favourite condiment. It’s also because of what it says about the importance of tradition, and of traditional working methods, in the modern food industry.

We were chatting the other day to Graham Houghton, Sarson’s technical manager. He was saying how an awful lot of the stuff that people put on their fish and chips, stuff that calls itself vinegar, isn’t really vinegar at all. He himself would call it ‘non-brewed condiment’ or ‘just acetic acid and colouring’.

What’s the difference? Some would say that acetic acid (in diluted form) is pretty much all vinegar is. The clue, it seems, lies in the name. The word vinegar derives from the Latin for sour wine. And historically vinegar, no less than wine, comes from an agricultural source.

The acetic acid in those ‘non-brewed condiments’ is a byproduct of the petrochemical industry. Acetic acid in proper vinegar, on the other hand, is created by the natural fermentation of an alcoholic foodstuff – whether that be made from grape or grain.

They say that wine was discovered by accident: jars of grapes in the ancient Middle East are supposed to have started fermenting by themselves under the influence of native yeast. Some have speculated that the invention of vinegar was no less stumbled upon, the result of wine having been left too long in the open air, exposed to oxidizing bacteria.

Whatever the truth, it’s remarkable how little help from human hands the production of alcohol and vinegar ultimately needs. The chemistry unfolds on its own: it’s merely a question of marshalling and directing the forces of nature.

Which is not to say that vinegar makers in history haven’t explored all sorts of ways of accelerating and upscaling the process. And the Industrial Revolution brought with it the mechanical means to mass-produce almost any kind of goods on a scale never seen before.

All of which has left something of a tension in the world of food manufacturing: a tension between the demand for a product which is authentic, or historically recognisable, and the pressure to produce the same thing more quickly, more efficiently and in greater volume than would have been possible in an earlier age.

It’s a tension that Sarson’s, who’ve been in business since 1794, are well-practised at negotiating. Their factory operations are a combination of the old and the new: time-honoured processes like mashing barley grains in hot water or cooling and fermenting the resulting ‘sweet wort’ (they don’t buy their alcohol in) are maintained in a production-line setting capable of rattling out millions of bottles a year.

Towards the end of the manufacturing process Sarson’s vinegar is scrupulously standardised to five per cent acid; and then it’s bottled and labelled by as slick a suite of automated machinery as you’ll see anywhere else. But other areas of the factory offer a glimpse into a much older world.

And nowhere more so than in the sight of the monumental wooden vats where the fermented wort matures, the alcohol slowly turning into acetic acid. These are the acetifiers.

Graham, our technical friend at Sarson’s, tells people never to mix up their acetifiers with their acetators. And the two things really couldn’t be more different. Acetators are modern stainless steel tanks for alcohol into which air bubbles are pumped by turbine power; those air bubbles trigger the oxidizing bacterial activity necessary for the creation of vinegar.

Sarson’s wooden acetifiers are no less efficient; but they’re much more traditional – and nowhere near as fast. An industrial acetator can turn its contents into vinegar in a matter of hours. Sarson’s acetifiers take seven days.

That’s because the dynamic relationship between the alcohol, the acetifying bacteria and the oxygen on which the bacteria thrive is completely different – almost reversed. Rather than having air, in the form of tiny bubbles, rushed through the alcohol, the alcohol is made to trickle slowly down through an aereated structure.

Which is where the wood wool comes in.  The people at Sarson’s lay bales of larch wood wool – ‘as if you were laying straw for cattle’, as Graham describes it – across the wooden staging that sits inside the acetifier. It needs to be kept light and fluffy, rather than densely packed, so that both the alcohol and plenty of air can move freely through it, interacting with the bacterial presence that clings to the wood wool’s extensive surface area.

And it’s entirely because the alcohol is allowed to drip through the acetifier at its own pace – rather than being blasted through with air bubbles – that the process takes as long as it does.

Interestingly enough, the trickle-down method of acetifying alcohol was once upon a time considered impressively rapid. For centuries before the ‘quick’ process was developed, the only way of making vinegar was through surface fermentation: alcohol was simply left standing in a vessel exposed to the air so that, in time, a film of bacteria would develop and then begin to acetify the liquid beneath.

Tricks for helping this chemistry along – kick-starting it through the addition of a vinegar culture and introducing air holes into the vessel walls near to the liquid surface – were as close as craftsmen of yesteryear got to turning an essentially domestic operation into something more industrial (back in the eighteenth century, this ‘Orleans Method’ was the standard commercial process).

The trickling method was a revolutionary advance on – and no doubt contributed towards the decline of – the age-old practice of surface fermentation. Compared to modern technology, however, the pace of its chemistry remains natural and unforced; and, thanks to it, Sarson’s vinegar has the time to take on a depth and roundedness of flavour impossible to achieve at high speed in stainless steel.

For that flavour is influenced not just by the larch wood wool, but by the Siberian pine vats that contain and contribute to the process.

These mighty tuns can be decades old. Unlike the absorbent wood wool, which becomes increasingly compressed over time and must therefore be changed every three to six months, the barrel interiors just get better and better with age.

It’s a kind of cask-maturing, not dissimilar to the use of oak barrels to age whisky, wine or indeed the celebrated balsamic vinegars of northern Italy. There’s a symbiotic, special relationship between these products and the wood they’re aged in which is one of the oldest gastronomic traditions of all.

Sarson’s vinegar may not be a gourmet product as such, but it’s as faithful to the requirements of its own tradition as many a more artisanal name. It’s also – like much of what’s most admired in world cuisine – indisputably regional.

Malt vinegar is as British as John Barleycorn – springing from the same cereal source as so many of the island race’s beloved beers and whiskies, and no doubt instrumental in the establishment of fish and chips as the nation’s favourite dish.

There’s little demand for it from overseas, apparently; and the lion’s share of Sarson’s exports goes to ex-pats unable – wherever they are in the world – to find anything remotely similar.

Which makes it all the more fitting, perhaps, that this most British of staples should be made with wood wool grown so close to home.

Before they were supplied by us, Sarson’s used larch wood wool from the Vale of Evesham. Now it comes from the Leighton Estate in Wales (see our earlier blog, below). It was an important transition for the manufacturing team and Graham, as technical manager, made sure that he saw the new material for himself (he remembers ‘spending a day in the back of a van with a burly Welshman driving us around the forest looking at trees’) before happily committing to the choice.

No one else in the UK (or, as far as we’ve heard, anywhere else) continues to use the wood wool method in the commercial production of malt vinegar. That’s interesting when you consider that Sarson’s is a bestselling brand.

In this case at least, it seems, taste and tradition add up to pretty much the same thing.