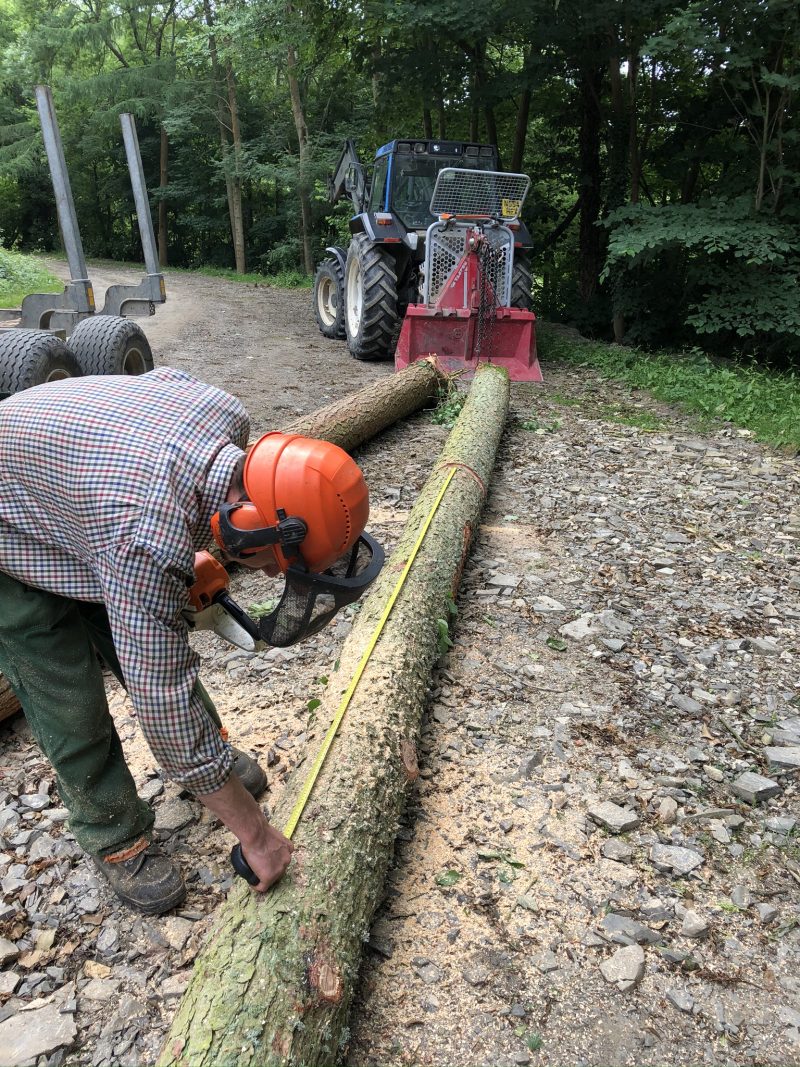 Proven and reliable suppliers are key to any successful business. In this article the Great British Woodwool Company blog looks at its timber supplier, Leighton Estate Woodlands. With environmental responsibility and sustainability heading the agenda for both organisations, it is a partnership based on shared values and a determination to attain the highest standards.

Deep in the heart of the Welsh Marches, on the opposite side of the River Severn from mighty Powis Castle, lie the Leighton Estate Woodlands.

It’s a thousand or so acres of picturesque, tree-covered hillside. It’s also a busy commercial forest that keeps an assortment of neighbouring businesses supplied with timber from a truly diverse range of species. We were given an insight into the management of the Estate when we talked recently to its owners, Charles and Victoria Crewdson.

It’s land, Victoria began by telling us, with a colourful backstory.

Originally, the woods were part of a great country estate, the historic pile of Leighton Hall in old Montgomeryshire. The house and grounds found a kind of fame half way through the nineteenth century when they were bought and spectacularly transformed by their new owner, entrepreneur John Naylor, into a fashionable Gothic mansion, complete with model farm (the only one of its kind in Wales).

But hard times and difficult decisions followed; and 1931 brought the sale that finally saw the Estate’s centuries-old woodlands separated – albeit as an entity intact – from their ancestral home.

Some of the Victorian trees, notably a grove of redwoods (sequoia sempervirens) planted in the 1850s, were later gifted to the Royal Forestry Society. They still stand today – surviving testament to Naylor’s pioneering spirit, and some of the oldest examples of their kind outside California.

Leighton Estate Woodlands has always had its eye firmly on the future.

And it certainly, as Charles explains, earns its keep. Over forty species of tree are kept in manageable compartments – and a significant proportion of what gets chopped gets matched to local building and manufacturing demands. As well as many varieties of softwood there are ash, oak, larch, cherry, sycamore, even ancient redwoods (thinning to allow the remainder to grow and thrive). All have their markets (and all are neighbours: almost all clients are based no more than thirty miles away).

It’s an impressively bespoke business. Not only are specimens for felling hand-selected – by head forester Will Jones – but different sections of timber are targeted at different kinds of use. In the case of ash, for example, wood from the lower part of the tree is set aside for the most heavy-duty purposes (this, it seems, is where Irish hurley sticks come from); material from the middle might find new life as furniture; while the topmost parts are right for firewood.

But Leighton is well-qualified to meet specific, even specialist, supply requirements.

One of the Estate’s more exacting customers is nearby Great British Woodwool Ltd. Of the three species of larch that grow on the estate (European, hybrid and Japanese), it’s the European variety (larix decidua) which has been found to make by far the best substrate for acetobacter in malt vinegar production. And it takes someone with Will Jones’s experience of thirty years or more to pick out, every time, only the European species from a mixed stand.

As Charles describes the business of choosing and chopping the estate’s wood, it’s clear that Will’s expertise is indispensable to the whole, tailor-made model of delivery; as is his hands-on relationship with almost every tree. If one has been blown down by the wind, Will is called upon to read the pattern of potentially dangerous stresses and forces in its position so that he can, himself, dissect it safely. And all his cutting aims to maximise the wood’s usefulness – creating as much timber as possible out of every felling, as well as pieces of the right lengths and shapes to fit with the requirements of specific machinery in the workshop or factory where they’ll end up.

For all its success in meeting the multiple commercial demands made of it, the Leighton Estate Woodlands are simultaneously managed as an ecologically rich and balanced forest, the natural health of which is designed to be sustainable into the very long term. The range of what the woods can offer for sale, it seems, is a close reflection of their biodiversity.

This is no monocultural swathe of spruce, waiting for the next clear-felling. As Charles puts it, the estate presents a ‘constant relationship with nature’ – not a brutal exploitation of it. The arrangement of the woods’ trees into compartments (each just two to three acres in size), allows for an optimum juxtaposition of species, or mixtures of species, of different ages. And compartments may go entirely untouched for decades. Thus, when demand calls for a certain area of trees to be thinned, any impact on the larger area is essentially contained.

It’s in fact an ongoing, gradual process of adding and subtracting. The woodlands are regularly reinvigorated with new plantings (often experimentally: eucalyptus, for example, though not indigenous, has been found to thrive here); and thinning happens all the time, to give the surviving trees room to reach their full potential. What’s particularly interesting is how well the estate has perfected the art of dovetailing the thinning process to the timber needs of its clients: even the by-products of what Charles calls the ‘uneconomic thinnings’ (of very young trees, where the cost of the work is not recuperated by the sale of the wood) are sold for biomass.

It’s an enterprise worth protecting; and keeping the woods safe from harm is a big priority for the owners.

The number one nuisance? Unquestionably the grey squirrel. Victoria has seen ten-year-old oaks quickly ruined by the things, damaged at the formative stage and bound thereafter to be stunted and disfigured.

Unlike so many of the trees that make up its habitat, the grey squirrel is one of those non-native introductions which Leighton is definitely not happy to have around. It’s simply because the environment lacks the natural predators to keep their numbers down – and, as Victoria says, ‘too much of one thing is not good: too much human is not good, too much squirrel is not good. It’s all got to be in balance’.

The Estate knows how fortunate it is to have been spared an import even more deadly – the larch disease phytophthora ramorum. Now affecting much of the UK, and with recent outbreaks reported as close to home as south Wales, the problem could, should it visit Leighton, not only see the end of some of the estate’s oldest and most majestic specimens, but, in addition, compromise the commercial viability of affected timber.

Every year the Forestry Commission flies over the forest to check that trees are budding properly; and Charles knows that, should anything amiss be spotted, he’ll have to act quickly.

The problem with any tree epidemic – and the team at Leighton is equally mindful of the threat posed by ash dieback (hymenoscyphus fraxineus) – is that, not only does it take out of commission a specific wood valued for specific commercial purposes (in the case of larch, for example, that’s not just the aforementioned woodwool but, because of its exceptional durability, outdoor fencing), but it subtracts from any woodland’s overall biodiversity.

With this in mind, and thinking of the future, Charles and Victoria would be pleased to see more stringent biosecurity standards in the UK; and cites the example of Australia for impressive practice.

The new plantings with which the Leighton Estate Woodlands routinely experiment are designed to deliver natural diversity over the coming decades – whatever damage individual pathogens might do to particular species.

And if there’s a theme to which Charles and Victoria keep returning as we talk, it’s that this process of nurturing biodiversity – of continuing to plant imaginatively and creatively for the sake of the woods’ species variety – is a long game.

Charles points to the example of the grand fir (abies grandis), which has been out of favour. However, more recently, it has become popular for its utility and its vigorous growth. It was an innovation that took a perhaps surprising number of years to get off the ground in Britain. The Estate has stands that were planted over thirty years ago. It can’t always be known, in the beginning, which plantings will go on to thrive – and that’s an axiom set to become truer, Charles notes, in the face of long-term climate uncertainty. He has started trialling eucalyptus.

The existence of such time frames (Charles likens the work of this kind of forestry to farming ‘but spread over a hundred years, not a year’) explains why those in its service need long memories. Will Jones’ lifetime of experience is from this point of view invaluable. But it almost inevitably has to be an intergenerational affair. Charles talks about what’s worked and what hasn’t from the long-ago plantings of his father-in-law – just as he looks forward to his son doing the same thing in fifty years’ time.

And if Charles and Victoria’s son gets to sell timber to the next generation of local businesses in the same way that Leighton does now, then that’ll be thanks to the efforts of Charles, Victoria, Will and the rest of the dedicated team that came before them.